Top 7 Foods to Try in Greece 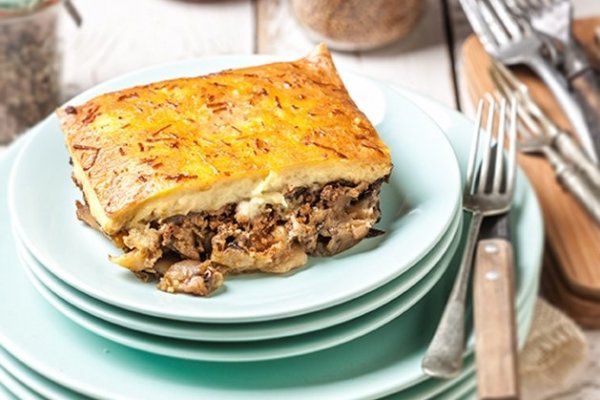 Top 7 foods that you should definitely try in Greece!

Perhaps one of the most iconic Greek dishes, dolmadakia is the savoury stuffed vine leaves. The vine (grape) leaves are a light and refreshing snack, served with a lemon wedge! They make for an excellent starter / appetizer when you’re dining out in Greece and are a firm favourite. The filling is usually stuffed with rice, fresh herbs and pine nuts, but it can vary and there are meat fillings too for the carnivores – usually ground lamb or beef.

An extra benefit is the vine leaves are super high in iron, fibre and vitamins A, C, E and K!

This is one for the fast food lovers but don’t let that put you off! A gyros is also an excellent Greek substitute for an on the go sandwich or wrap! A gyros, pronounced (YEE-ros), is a bit like a doner kebab however it is usually chicken or pork. That being said it can be any meat! It is accompanied by French fries and salad, all stuffed into a pita wrap with some tzatziki on top! It may sound strange, but it is an excellent comfort food, hangover cure and filler if you’re peckish and need a quick fix. It wouldn’t be a trip to Greece if you didn’t at least try one. We won’t tell!

Known as Greek meatballs also known as the best meatballs ever, can come as a starter/appetizer or a main – or both if you’re a big fan. As a starter, you might just have it with some sauce and a pita. As a main, it is likely to come served with rice and a traditional Greek feta salad (another thing you must try!) They can even come on a meat meze, so really, it’s up to you how you eat them.

Also known as Greek Honey Donuts or Honey Balls or Honey Puffs, these are basically balls of fried dough, drizzled with honey and dusted with toasted sesame or walnut. They’re a great treat – despite the calorific value, but you’re on holiday right? Who’s counting calories?

This is a main dish you have to try in Greece, it’s usually meat (and sometimes vegetables) cooked on a skewer and eaten straight off the skewer while it’s still piping hot. Served with French fries, rice or pita bread (or all of them), this is such a tasty dish. The most traditionally Greek version of this dish is to have a pork souvlaki with pita bread, a wedge of lemon and a variety of the best Greek sauces, in particular a creamy tzatziki.

Dating back to the 1920s, this famous Greek dish is adopted all over the world – but nothing beats a freshly baked, Greek Moussaka. A béchamel (white) sauce and thin slices of fried aubergine are the two main staples of this dish. In Greece, you will find it served warmed or at room temperature usually.

Eaten on its own, cold or warm, baklava is pastry dessert or snack. It is simple yet incredibly rich and sweet. It is primarily made up of filo pastry and crushed nuts, folded together and then soaked in honey, to keep it stuck together.

The origin of this delicious treat is unclear, but it is believed that the oldest recipe dates back to 2nd century BCE, in Roman times where they made a dessert called placenta, but it is very similar in description, as a layered ‘dough’ bake that is completely saturated with honey.

Both heavily influenced by the Roman and subsequent Byzantine Empire, the Greeks and Turks still disagree about the origin of Baklava. Currently both countries claim it as their own invention, however arguably if the Romans did create placenta and therefore baklava – is baklava technically of Latin origin?

Regardless of its origin, it’s a must try when in Greece! Similar in ingredients, but a different shape and consistency, is baklava’s shredded cousin kataifi – try this on another night and see which you prefer!